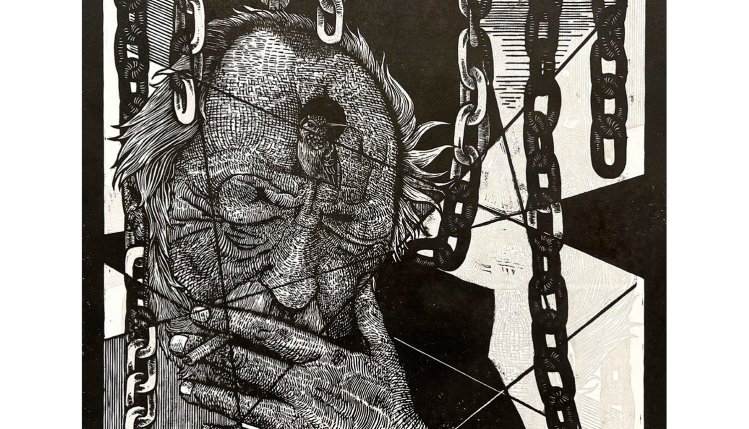 ‘Primero’ by Raymundo at RBR Gallery

Bryan Raymundo is an emerging printmaker artist. He is studying for a master of fine arts degree in printmaking at Kansas State University.
He is on track to graduate in May 2023.

His undergraduate degree in printmaking is from Wichita State University. Raymundo says, “there are few places in the midwest to do a printmaking show,” fortunately for him, here in Omaha, there is a gallery doing almost exclusively printmaking art exhibits.
John Rogers is the director of the Roberta and Bob Rogers gallery or RBR gallery. Rogers is dedicated to giving opportunities to new artists in the fine-art-print style.
Raymundo met John direct through a friend in Omaha, and John asked Raymundo to do a show at RBR Galery. Raymundo brought his “Primero” show.
For the “Primero,” Raymundo used layering, folding, cutting, and dissecting to showcase his experiences with materials and processes.
“First showcases work that has allowed me to explore the tension and suspension between cultures in my upbringing,” Raymundo says. “My experiences inspire the imagery in these prints in suspension between Mexican and American culture.”
Before wanting to be an artist, Raymundo started college intending to be a physical therapist; taking a class about printmaking changed his life.
Raymundo was born in Wichita to Mexican parents. He lived much of his childhood in Durango, Mexico, with his grandmother until she passed away from a terminal illness. When he returned to the United States, it was hard for Raymundo to adapt to the american culture, but printmaking has helped him immensely.
The “Primero” exhibit will be at the RBR Gallery until Jan. 7, 2023. More information at rbrg.org

Jerry Long played Scrooge for many years at the Omaha Community House. His favorite act is when he comes out to greet the spectators. Longe first moved to Omaha in 1980 and toured with the Nebraska Theatre Caravan’s production of A Christmas Carol playing Marley, Ghost of Christmas Present, and Jake. He is ready to take up a new role in his life.