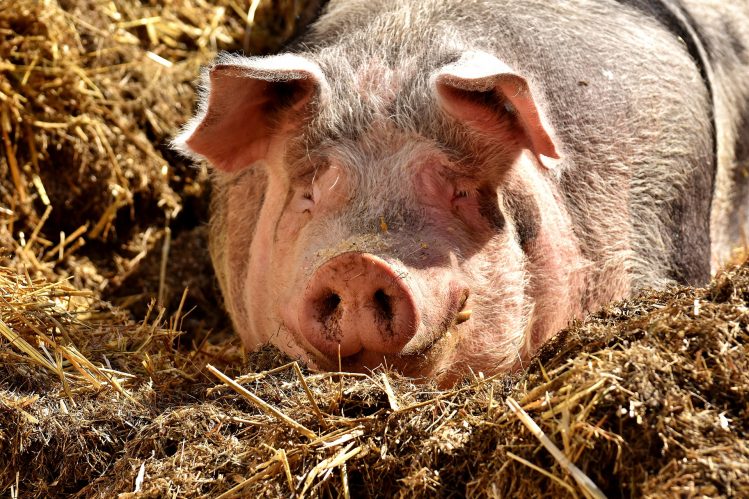 People say that when times get tough, the tough get going.

My high school coach used to say that all the time, but then he retired mid-season.  I guess he just “got going.”

In 2014, a woman brought along her 80-pound “emotional support pig” on a Delta Airways flight. She got kicked off the plane when the pig, instead of being supportive became scatologically disruptive. Soon the news channels were all ridiculing the idea of pork-flavored support animals. Leaping to the defense of pigs on planes, the American Mini-Pig Association joined the controversy by arguing that the woman had simply chosen the wrong breed of pig, and that there were many appropriately sized porcine companions more suitable for air travel. This surprised me, not because I didn’t know about small pigs, but because I would have never guessed that there was an American Mini-Pig Association.  In fact, they have an online store, and FYI, they sell T-shirts, hats, and tote bags. They do not sell mini-pigs.

There was more trouble on the tarmac when a Frontier Airlines flight was greeted by police at Las Vegas’ McCarran International Airport after a passenger’s “emotional support marmoset” got loose during the trip from Columbus, Ohio.  Even after an exhaustive search the police and airline staff were unable to find the little primate and it apparently…you guessed it…stayed in Las Vegas. I love it when advertising slogans come true.

People even bring horses on board airplanes. Miniature horses were specifically given the green light to keep flying the friendly skies. Which makes me wonder if the owners have to bring along “emotional support” shovels and buckets.

Okay people love horses, I get that…As for goats? Not so much…“emotional support goats” had become so common that Alaska Airlines banned them from coming aboard their planes. Common? Were people smuggling goats into Alaska?  Or were goats attempting to escape? I haven’t solved that mystery.

A Colorado State University student studying clinical/counseling psychology had an “emotional support” sugar glider. I don’t know if that’s good or not. I have no idea what a sugar glider is. It could have talons and a thirty-foot wingspan, or it could fit into your fanny pack. I don’t know.

Some people have even traveled with “emotional support” goldfish—I assume on short flights. I have seen stories about monkeys as support animals, though vets advise against this. One article on Yahoo! read, ”As non-domesticated animals, monkeys may be nice as babies but once they reach maturity, they usually become aggressive and very difficult keep. They also have a tendency to bite, scratch, and throw feces.” That certainly, is not emotionally supportive behavior, at least not when traveling. And, please, don’t get me started about “emotional support tarantulas.”

I know, I sound cynical, but after examining the entire concept, I have finally come around. I now have my own “emotional support,” though it’s not an animal. I find great comfort, and stability in my choice. I look forward to years of stability…Yes, I now have an “Emotional Support Athlete.” He is really good. My team will always win. And I will be okay. Yes, my mental health, in fact the sanity of this senior citizen, rests entirely on a 24-year-old kid from Texas.

Much better than a sugar glider or a marmoset, my emotional support athlete: Patrick Mahomes. I’d take him on an airplane, but he’s already in first class.

Editor’s Note: A sugar glider is a nocturnal gliding possum with a taste for sweet foods.

This article originally appeared in the May 2022 issue of Omaha Magazine.

Drawing a Line to Chopin

When KVNO station manager and host of Midday Classics, Sherry Kennedy Brownrigg, asked if I'd be willing to draw a cartoon celebrating the music we play, I instantly knew the direction I'd go. Occasionally, ideas are like that. They practically write (or draw!) themselves. Besides, the topic is one in which I'm very passionate.