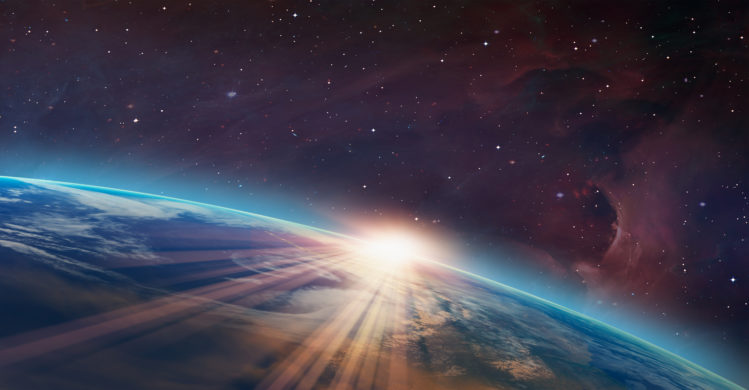 So, I was thinking of launching myself into space.

It just popped into my head the other day when I was cleaning the air filter on my Lawn Boy. Maybe it was fumes from the gas I’d spilled on the deck of the mower when I filled it with the old red can with the leaky spout. Maybe it was the sun on the back of my neck. After all, it was closing in on 90 degrees and the humidity was somewhere past Panama Canal Zone in intensity. That combined with the fact that the thick air was as still as the inside of Leona Helmsley’s prison locker, and that I had not been watching my fluid intake since the night before when I tossed down one-third of a six pack of Nonalcoholic Clausthaler’s to go with three handfuls of low-salt “Cheddarific” microwave popcorn—a class of snack that should be forbidden by the Geneva Conventions.

At any rate, for just a second, I was floating above my yard looking down on the guy cleaning the air filter—me. As I floated higher I noticed the gap on my back between my sagging beltline and my t-shirt as it crept up my sweaty spine…the classic plumber-bending-over pose. (These kinds of “near death” experiences are invariably humbling, which is why you never hear of a narcissist who has ever had one.) Luckily, I continued ascending and that little fleshy tableau blurred out of focus as my altitude increased.

The topmost branches of the huge Maple in my neighbor’s yard came into view including the home of my nemesis, Mr. Squirrelly Squirrel McSquirrellypants. The dastardly rodent who pilfers my suet and disturbs my Nuthatch friends at the feeder. Then higher and I saw my block and every garden that was doing better than mine—no doubt because some people have time to weed—and then higher and as I gathered speed, I just missed the police chopper as it circled the nearby interstate interchange where odds are there was at least one idiot in a Tesla testing his auto-drive…and higher still.

It was like a YouTube video that you start watching and then lose interest in, but the mouse isn’t responding despite your frantic clicking, and on you go. I passed through clouds and out into the stratosphere where the air was thin and suddenly a guy who looked like Richard Branson was staring at me with a near frozen grin from a passing porthole followed shortly by a bald, grimacing billionaire whose name I could not quite place in a much louder and smokier rocket…. That’s when I sneezed and began to fall. Down I went, like zooming your iPhone camera in on an ant on the patio between your Birkenstocks.

Before I knew it, I was cleaning the air filter again, only slightly dizzy, tugging at the beltline at the back of my jeans and trying to remember where I’d put the butterfly nut that held it all together.

So, I was thinking of launching myself into space, but then I decided…nah.

This article originally appeared in the September/October 2021 issue of Omaha Magazine.

The Case for Taking a Break

Getting away, with a book, a hobby, a walk around the block, for 15 minutes, or a weekend, or a lengthy vacation, is absolutely vital.