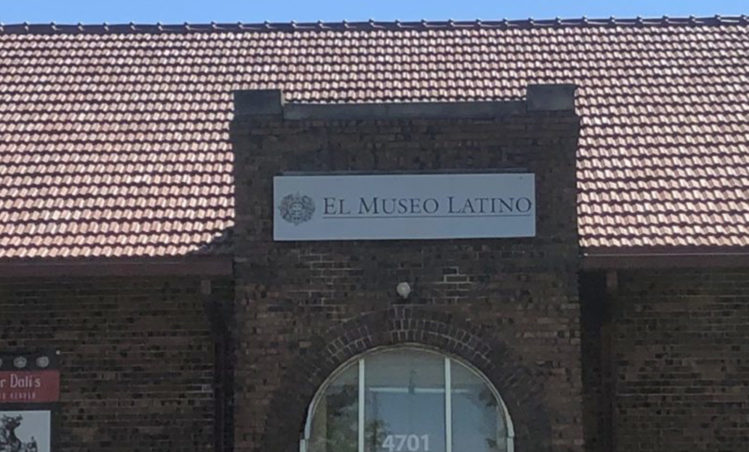 García And Her Dream of Working in a Museum

At the head of the Museo Latino in Omaha is Magdalena Garcia. 28 years ago, Garcia founded the Museum in the stockyards building in South Omaha. There, she received 10 months of free rent in exchange for organizing and cleaning the building. The first exhibition featured typical folkloric costumes from Mexico. Just a few weeks ago at the Latino Museo, the exhibition Stairway to Heaven by the Spanish painter Salvador Dali began. This exhibit includes 143 prints signed by Dali.

The Museo Latino is located at the corner of 25th and L streets. That building was part of South High School before being purchased for the Museo Latino in 1997. There are only seventeen Latino museums in the entire United States. The one in Omaha is the only one between Chicago and Denver.

After 28 years of having the museum open, she remembers how it all began.

“I’ve always been interested in art school,” Garcia said. “I was an artist in high school. If I had extra class three I was in the Art Room doing something.”

Garcia remembers her trips to Mexico when she was growing up.

“Well, my aunt, one of my father’s sisters, she was an artist working the publishing. I don’t know exactly what she did, but I know that she did drawing and she did all kinds of art. She’s actually the one that every summer that we went I was there. I’m the oldest one so she would kind of take me with her and, you know, she loved the art so she would take me to museums, Bellas Artes, ballet, opera, symphony; it was everything we did. So to me, that’s how I grew up. I mean, I remember, you know, staying over at our grandparents’ house and Saturday morning she’d be cleaning house with, you know, an opera roaring and it was just… I didn’t think it was anything strange.”

Garcia came to Omaha when she was 9 years old. She had three siblings born in Mexico, and two more were born here.

Soon she started attending school and remembers that some teachers took a special interest in her since she did not understand any English and the ESL program did not yet exist in Omaha.

Years later, when she was working in the corporate world, she was offered an opportunity to volunteer at the Joslin Museum. It was a life changing event for her.

“I remember the moment that the curator took us into one of the vaults. There were all these watercolors and these beautiful paintings and she started to talk about, these are ready to be farmed and these are going to be sent out to the East Coast to get some restoration, to have some conservation done, and these are here and I know I stood still there. I thought I’d find a way–I want to be in a museum all the time.”

While Garcia worked for Northern Natural Gas in the Human Resources department, she attended college part-time.

One day, Garcia had to leave the gas company, and with the severance money she decided to go back to study and change her major from business administration to art history. She earned a degree in art history from the University of Nebraska.

“I visited with the museum director at the time – “How do I get here? How does one get into a museum?” Well, small museums wear a lot of hats, but in large museums, they’re very specialized personnel. There’s PR, there’s marketing, there’s education, curatorial.”

Garcia has a BA in Art History and has an MA from Syracuse University NY. At one point, she had to choose between New York City or Los Angeles for an internship.

“So I ended up accepting the one at the LA County because they accepted me in the education Department. They were going to be hosting the huge blockbuster exhibition of Mexico, Splendors of Three Centuries, so I was able to create, you know, some of the bilingual material. It was the most wonderful experience towards the end of, you know, in August. When I was getting ready to leave the crates started arriving. It was, you know, amazing. I thought this is what I am meant to do.”

The internship in LA was essential in Garcia’s training, but in that time, she also learned something else.

“But in the process of looking for that internship is where I found that there were only four Latino museums in the United States and existence in 1989.”

That is when the idea of having a Latino museum in Omaha was born for Garcia. Conversations with some friends began on the subject and, after completing his master’s degree, the idea of having a Latino museum in Omaha took shape. The Hispanic population was growing in this area. She needed a board of directors, funds to start and she also wondered if people would visit. In 1993, Garcia took advantage of the Cinco de Mayo festivities to open her museum. Since she did not have the budget to advertise in that month, it was helpful that people already had their attention focused on Hispanic celebrations.

Garcia says that to date, the Latino Museum has had important exhibits, has provided service to the local and national community, and is now part of Omaha’s culture. She also says that the community has been generous to the museum, but non-for-profit work is even more difficult when it comes to art.

“Art is not usually one thing that has always been at the top of the list for anybody, in anybody’s budget, so it’s been tough and there’s been years where, you know, their artists were totally eliminated from school budgets and things. So a lot of times I think we don’t value art and culture the way that we should. I know when we think about human history, what survives, that’s how we know our history.”

Garcia has in mind a project that will cost millions of dollars to make the Latino museum even better. She would like studios for artists so the museum can have house artists. She also wants an exhibition hall with climate control and space to provide classes and workshops.

After 28 years, her favorite moments at the museum are when the exhibition crates arrive; she said it is like Christmas for her.

“I can still get excited when I get to crate stand even though I know it’s in there for me. If I ever get to where I don’t care what’s in there, then I’m going to have to find something else.”

OMAHA-Technology, Entertainment, Design, or TED's mission is to spread ideas, TED is a global community, that welcomes people from every discipline and culture who seek a greater understanding of the world.